The intention is to post new individual paintings available for sale on this page before I post them anywhere else such as my main blog - Bicyclistic, twitter, or Google+.

There are over 300 paintings posted there in the photos section - sorted into albums such as Irish Streetscapes, Irish Landscapes, and Birds & Wires. Other projects are also being posted here - like The Cow of Kells, the CowParade cow I painted when living in Kansas City, Missouri.

Major online sales will continue to be launched first to my mailing list - which you can join by submitting your email address in the sidebar of my blog, Bicyclistic. Then I will make the paintings available first to the facebook page, LiamDalyArt.

So 'Like' my page on facebook to stay informed, and feel free to interact with me there.

There is an online sale of my new paintings until the end of December.

Starting with 30 pieces more paintings will be added into the sale where prices are 30%-50% reduced until the end of 2010.

The October issue of Status Hat is themed on LANDSCAPES and I am one of 6 visual artists featured in a special showcase "Perspectives of Landscapes".

The link on my name at the top of the article is faulty so you'll need to scroll down where near the bottom you can see a slideshow of 5 of my paintings together with some words about why I paint.

Status Hat itself is an excellent magazine well worth a read, whether you visit its site monthly or subscribe to it by email. 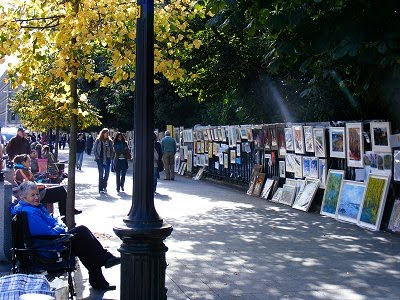 On Sep 24-26, 2010 I participated in the People's Art Exhibition on Stephen's Green in Dublin.

Once again I used my bicycle to transport all my paintings to the Green, and enjoyed the company of the artists either side of me. 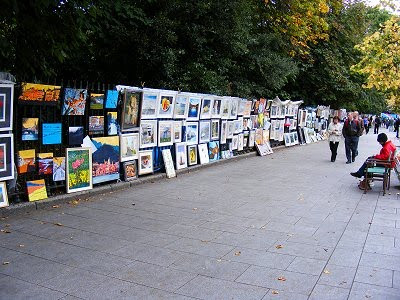 Here's a couple of photos - though the event looked loveliest on the Sunday, the sunniest and warmest of the 3 days of the show, when my camera batteries failed.

The number of paintings I displayed was 16, of which 7 were brand new never having been displayed anywhere before - indeed a few of them were only finished on the Friday morning after several all-night sessions.

Also on display was a painting I did 19 years ago which rejoined the stable over the weekend as its owners are trading up to a new painting.

Much as I enjoyed the event - as I did the only other time I did the People's Art, in June - I haven't decided if I'll do any of the events in 2011 (there's 3 each summer - Jun, Aug & Sep) but let me know if you'd like me to alert you should I decide to.

The weekend of June 25-17, 2010 - that's Friday through Sunday - I'm exhibiting some paintings in the People's Art exhibition at St. Stephen's Green in Dublin.

For site details and more see the People's Art on Bicyclistic.com.

Recently I was on the Dublin City FM radio programme The Persuaders  in a special about blogging for business where I discussed how I sell paintings online.

Listen to a podcast of the programme (mp3)

There's some more background to the show on my blog and on the persuaders blog.

This blog has moved


This blog is now located at http://talkingsquares.blogspot.com/.
You will be automatically redirected in 30 seconds, or you may click here.

For feed subscribers, please update your feed subscriptions to
http://talkingsquares.blogspot.com/feeds/posts/default.

Audio Slideshow of me in my Studio

On my Bicyclistic  blog you can watch a short (2 minute) video of photographs of me along with some quotes, all set to some really nice music by the Redneck Manifesto.

The video was created by journalist Markham Nolan following a visit to the studio where he took a load of photographs and interviewed me. MArkham talks about the project here

Painting is on a go slow at the moment thanks to developing Tennis Elbow in the rush for the Rathmines Show. It got worse through May untiil finally in June I could no longer paint with my right hand at all.

Currently I'm teaching myself to paint with my left hand - the drawing is going well - and through one arm or the other hope to have new paintings before too long. It's looking less and less likely that I'll manage any of the planned shows during the summer however but something should happen online at least.

Meanwhile, to keep juices flowing, over on Bicyclistic I've been posting photos.

And Here's The Stuff I Wrote Earlier: